07/03 The Very One Handicap is the target for CLIFFROSE

CLIFFROSE (Monsun-CENTAINE) bred by Graf und Grafin Stauffenberg is entered in todaysÂ´s Very One Handicap, Gr.3 in Gulfstream Park, USA. The daughter of German Oaks winner CENTAINE is running in the colours of Augustin Stable and prepared by Hall of Fame trainer Jonathan Sheppard. 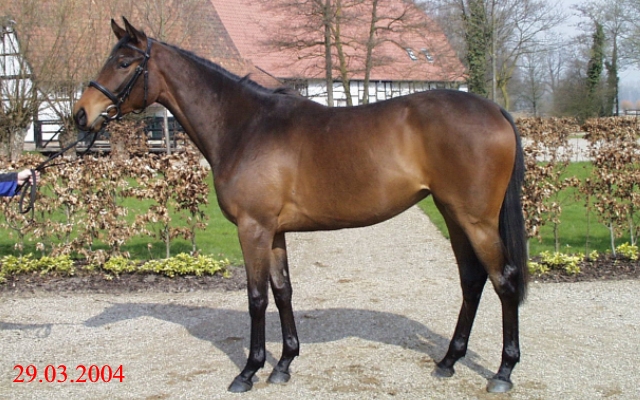 Geir Stabell of Globeform gave the following statement in the EBN:
" ... against Mauralakana (Muhtathir), also trained by Clement, and Cliffrose (Monsun), an impressive Listed winner in Germany last year, when she was in the care of Erika Mader. Cliffrose is now trained by Jonathan Sheppard and she was finishing best of all when second in a classy allowance race over this course in February. Eclisse (Ski Chief) was third in that race and this French-bred import also runs in the Very One, staged over eleven furlongs. Mauralakana is the likely favourite, having won the Gr.3 Locust Grove Handicap at Churchill Downs last year ..."

CLIFFROSE (Photo as 2yo at Schlossgut Itlingen) was not sold at the Tattersalls October Yearling Sales and later purchased by George Strawbridge through German International.