filly wins the Blandford Stakes for the Aga 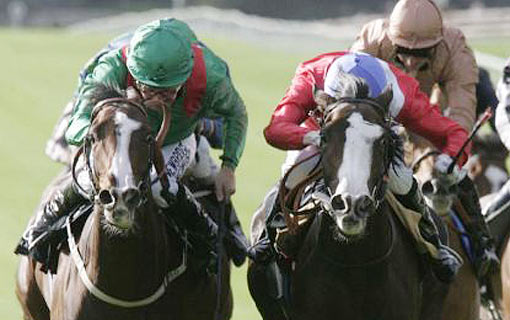 3yo FOUR SINS (Sinndar-Four Roses) bred by Graf und Grafin Stauffenberg and raised at Schlossgut Itlingen, won today's Irish National Stud Blandford Stakes, Gr.2 on the Curragh. The filly, purchased by H H Aga Khan at the Goffs Million Sale is in training with John Oxx and was ridden by Mick Kinane. This was her second Group win as she won earlier in the season the Gr.3 Blue Wind Stakes.

FOUR ROSES has a yearling colt by Tiger Hill, which topped the Goffs Foal Sale in 2006, when sold to Sheikh Mohamed and a colt foal by Refuse to Bend. The mare has not been covered in 2007 due to late foaling.