01/09 Fait Accompli one of the highlights at the BBAG 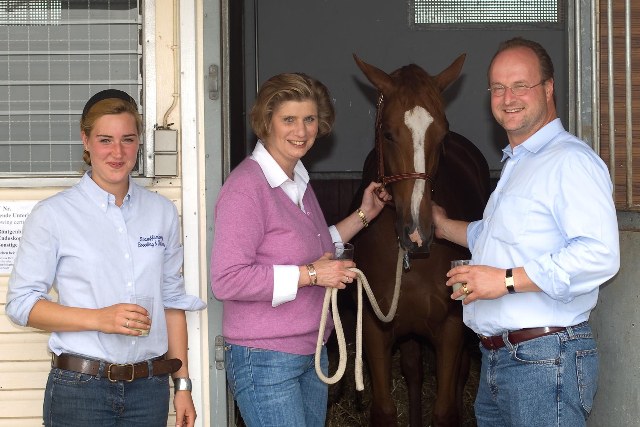 FAIT ACCOMPLI (Bering-Fantastic Flame) bred by Graf und Grafin Stauffenberg and raised at their Schlossgut Itlingen, was one of the "most talked" horses at the BBAG Yearling Sale. This is a huge compliment to the staff at the stud, who showed the filly in the best possible condition.

240,000 for Lot 148, a filly by Bering named Fait Accompli. Bidding opened up at â‚¬80,000 and Alles had to outbid MartilloĂ˘â‚¬â„˘s owners Gestut Hony-Hof to secure the full-sister to the Hong Kong Gr.2 winner Bahamian Dancer. The filly, a lovely individual who was racy and oozed quality, has been bought as a racing and breeding prospect. Her half-sister by Oasis Dream, named Fairfield Flame, was bought for â‚¬230,000 at Goffs November Foal Sale in 2005.
Their dam Fantastic Flame (Generous) comes from the top-class Ballymacoll family of Pilsudski and Fine Motion. Vendor Philipp von Stauffenberg said, Ă˘â‚¬Ĺ“We really liked this filly. The mare has an Oasis Dream filly at foot and we had originally planned to retain this filly and sell the foal. But she unfortunately fractured a sesamoid and chances are she wonĂ˘â‚¬â„˘t race and certainly wonĂ˘â‚¬â„˘t be fit for sale at auction, thus the change of planĂ˘â‚¬Âť.