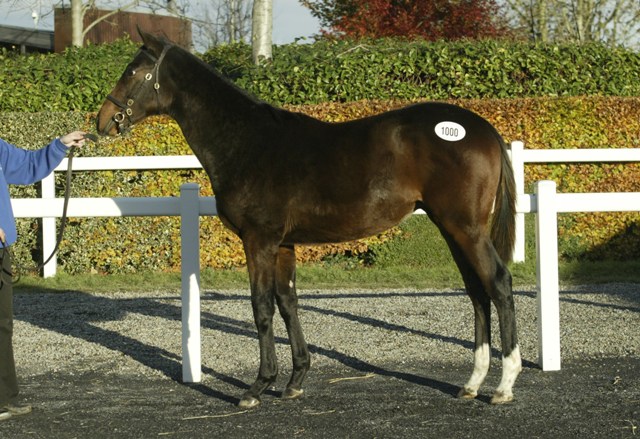 2yo GENEVA GEYSER (One Cool Cat-GENEVRA) bred by Graf und Grafin Stauffenberg, won his Maiden in Great Leighs in England in good style. This was his second start, but the first really race. Last time out he clipped heels and fell at Newbury. As he is a scopey sort, there seems to be a lot of improvement in him, reports the Racing Post.
The colt is owned by J Smith, the owner of Littleton Stud, is in training with James Eustace and was ridden by Luke Norris. GENEVA GEYSER (photo at the sales) was sold at the Goffs November Foal Sales.

The other winners bred by Graf und Grafin Stauffenberg this month were 3yo DER SPIELER (Singspiel-Dabara), who finally won his Maiden in Dortmund in good style against a sister to Gr.1 winners SABIANGO and SILVANO. The now gelding is owned by Stall BBC, trained by Christian Freiherr von der Recke and was ridden by A Piesch.

And finally FREEZE THE FLAME (In the Wings-FANTASTIC FLAME) won with 8 length on his second start after a long break. He had an tendon injury in March 2007. He is owned by The Outlaws, trained by Charlie Egerton and was ridden by P J Brennan.